Due to inclement weather and rainfall expected throughout the day, Idlewild will be closed today, Saturday, Oct. 1.  The park will open for HALLOWBOO! at 11:30 a.m. tomorrow, Sunday, Oct. 2.  Tickets dated for today can be used any other HALLOWBOO! date.

What are you looking for?

The Place For Families To Create Lifelong Memories Together

Want to create fun memories with your family that will last a lifetime? Idlewild & SoakZone is the place to be! With over 145 years of experience behind us, we are leaders in family-friendly fun and entertainment. Awarded as "Best Children’s Park" by Amusement Today, we guarantee smiles, laughter, and excitement to all who visit.

Since 1878, Idlewild & SoakZone has been provided smiles on faces and laughter in the hearts of all who visit. What started out as a simple picnic ground along the Ligonier Valley Railroad has grown into one of the most scenic and well-loved entertainment facilities in all of Pennsylvania.

Nationally recognized as "Best Children's Park" by Amusement Today magazine and "Best Park for Families" by the National Amusement Park Historical Association, Idlewild & SoakZone is your place for family fun! It offers seven theme areas of fun, including the nostalgic Story Book Forest and Olde Idlewild coupled with new and exciting areas such as SoakZone and Daniel Tiger's Neighborhood. Jumpin' Jungle, Hootin' Holler, and Raccoon Lagoon Kiddieland round out the fun.

There is something for all members of the family here - from the little tykes to grandma and grandpa, all within a beautiful, and relaxed setting. Picnic grounds are available for family meals, but the park also offers some of the most tasty treats you'll find anywhere – including the iconic potato patch fries, giant turkey legs, and the infamous cyclone strawberry waffle cone. Daily entertainment is abundant on several stages throughout the park and appeals to all members of the family. Costume characters enhance the experience in Story Book Forest and throughout the park, as Daniel Tiger and Katerina Kittycat greet all of their neighborhood friends who come to visit.

Whether it’s your first visit or you’re a lifelong season passholder, a trip to Idlewild & SoakZone promises family fun with unforgettable memories. Located about 1 hour outside of downtown Pittsburgh, Idlewild & SoakZone is one of Pennsylvania’s best entertainment options for families. Great deals on Idlewild & SoakZone tickets can be found for any budget, and our group sales department is here to help plan an unforgettably fun visit for parties for anywhere from 10 to 10,000 people!

Visiting Idlewild & SoakZone from out of town? Our lodging page has great rates on nearby hotels. We also offer special combination passes with our sister parks, Kennywood and Sandcastle Waterpark.

The History of Idlewild

The Beginning: 1878
On May 1, 1878, Idlewild Park came into existence when William Darlington, owner of the property, gave the right and privilege to occupy his land for picnic purposes or pleasure grounds to Judge Thomas Mellon, owner of the Ligonier Valley Railroad. Prior to this time the Ligonier Valley Railroad only accommodated narrow gauge trains and was used solely to move coal 5 miles north from the mines at Fort Palmer to Latrobe where it would then connect with the main Pennsylvania Railroad line.

Under the Darlington-Mellon Agreement, development of the park would include campgrounds, an artificial lake for boating and fishing, picnic tables, and a large hall. To promote the park, Idlewild was advertised in the Pittsburgh and surrounding areas with special focus to draw churches and schools to the site. The park continued its success as an enticing spot for city dwellers to visit the country for a weekend with a convenient station for arrival using the Ligonier Valley Railroad.

The 1930s
Before 1931, attempts to commercialize America's most beautiful recreational park had failed. During that year, C.C. Macdonald and Richard B. Mellon, son of Judge Thomas Mellon, became interested in Idlewild. They pooled their resources to improve the property and developed more attractions. As manager in this new partnership, C.C. Macdonald planned and supervised the construction for the parks improvement which are still part of Idlewild today. Our most famous is the almost century old carousel that was built by the Philadelphia Toboggan Co. in 1931.

The 1950s
1952 saw the end of the Ligonier Valley Railroad. Although it had been a vital factor to the early success of Idlewild Park, its abandonment had little effect on the continued success of the park. Under the new owners, the Macdonald family, who purchased the park from the Mellons in 1951, Idlewild park continued to grow and improve. Story Book Forest was added in 1956.

The 1980s
Few changes were made at Idlewild Park until February, 1983 when Kennywood Park Corporation took ownership. During the first winter, major changes began to occur including the addition of our Jumpin' Jungle children's area. Story Book Forest was no longer run as a separate operation and became, instead, one more attraction in the Idlewild Park entertainment complex. Historic Village, once located on the Ligonier side of Story Book Forest, was relocated to the center of the park for the 1984 season and was renamed Hootin' Holler'.

With the ever-growing popularity across the country in water parks and attractions, 1985 saw the creation of the H20hhh Zone and the addition of Little Squirts eight years later. 1989 provided expansion across the Loyalhanna Creek with the addition of Mister Rogers' Neighborhood of make-believe and a trip on the neighborhood trolley. This area was expanded in 1990 to feature a new kiddieland area, Raccoon Lagoon.

The 1990s
The 1990's began the wildest years yet as the Wild Mouse Coaster made its debut in Olde Idlewild. The 21st century brought additions of state-of-the-art slides and other participatory water activities, doubling the water park's size and leading to a new name: Idlewild & SoakZone!

The 2000s
On October 6, 2012, the Pennsylvania Historical and Museum Commission recognized Idlewild Park and its long history with a roadside marker. A fitting tribute to the longest-operating theme park in near Pittsburgh, PA and the state as a whole, and 3rd oldest in the entire country.

The new owners, Palace Entertainment, added 2 new large scale attractions to the SoakZone – the Wowabunga Family Wavepool and Float Away Bay Lazy River. They also added the Mister Rogers’ Neighborhood attraction transitions to the all-new Daniel Tiger’s Neighborhood in order to appear to the children of today while still keeping the spirit of Fred Rogers alive. The attraction is joined by an all new stage show and character meet-and-greets. 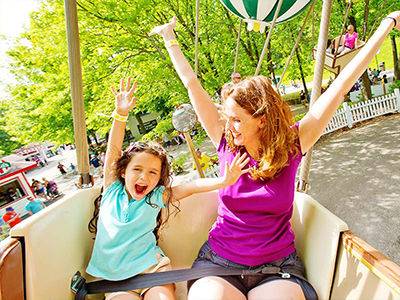 A Full Season of Events

A Full Season of Events